Sometimes it can feel like there’s a new trend or acronym every day! We understand how overwhelming it can be to venture into new realms of the internet. 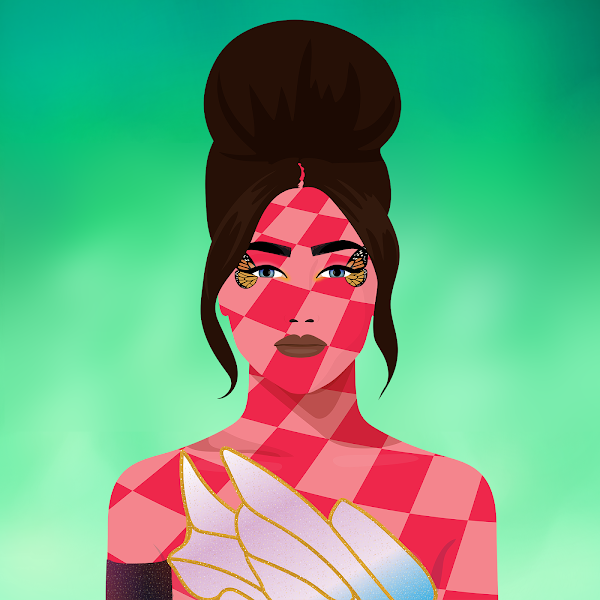 In an evolving world, it can be difficult to keep up with the lightning speed of the internet.

So we’re here to tell you, we got you. Take our hand, hang on tight, listen to our soft voice as you follow us down the rabbit hole because these are the terms to know when entering the Violet Verse.

If Bitcoin is the Regina George of cryptocurrency, think of alt coins as the Gretchen Wieners and Karen Smith of the crypto popularity contents. Altcoin is an umbrella term to label any cryptocurrencies that are not Bitcoin.

Basically the treasure map of the internet, the algorithm is a code of mathematical instructions computer software implements to produce a desired income a.k.a richest and success beyond your wildest dreams.

Atomic swaps are a protocol or action that allows digital collectibles or tokens to be traded peer-to-peer without any centralized or third-party intervening with fees and regulations. Put simply, it allows two users to transact their assets without any intermediary facilitating the exchange.

A protocol or action that allows digital collectibles or tokens to be traded peer-to-peer without any centralized or third-party intervening with fees and regulations. Put simply, it allows two users to transact their assets without any intermediary facilitating the exchange. The Violet Verse protocol will allow two users to send and receive their $VV tokens without any intermediary facilitating the exchange.

She’s the OG, the most popular girl in school, the Regina George: the very first cryptocurrency. Bitcoin was created in 2008 by an individual or group of individuals operating under the name Satoshi Nakamoto. No one really knows who invented Bitcoin, but we love a mysterious bitch. The coin was created with the intention to be a peer-to-peer, decentralized electronic cash system.

Show me the receipts!! The blockchain is a digital record/ledger of the transactions conducted in a particular cryptocurrency. This record is built block by individual block that are chained together through a cryptographic signature. Each block has limits and when reached, a new block is added to the chain. Each blockchain is continuously copied and saved onto bajillions of computers around the universe. What’s significant about the blockchain is its transparency so everyone can “show the receipts,” making it a decentralized ledger!

A category of digital assets and collectibles that represent a high-quality collection, brand or product or Web3. It's like the new luxury moniker in Web3 and refers to blockchain projects that are stored on Ethereum.

Hitching various DeFi protocols and application on the blockchain.

The currency of the digital world, cryptocurrency refers to a form of encrypted and digital information used as currency. Currently, cryptocurrency operates outside of any banks because of its use of intense mathematics to regulate the creation and transfers of funds.

The grueling and long process of encrypting and decrypting information. It’s the study of secure communications techniques that allow only the sender and intended recipient of a message to view its contents. The term is derived from the Greek word kryptos, which means hidden. It is closely associated with encryption, which is the act of scrambling ordinary text into what’s known as ciphertext and then back again upon arrival. In addition, cryptography also covers the obfuscation of information in images using techniques such as microdots or merging. Ancient Egyptians were known to use these methods in complex hieroglyphics, and Roman Emperor Julius Caesar is credited with using one of the first modern ciphers

Who doesn’t love the mall?! If you’re interested in purchasing crypto, you gotta make your way to a crypto exchange, or a place for buying and selling cryptocurrencies. Crypto exchange venues offer loans and custody of assets as well. Examples of crypto exchanges include Binance, Coinbase, Gemini, etc.

DAOs are an effective and safe way to work with like-minded folks around the globe.

Think of them like an internet-native business that’s collectively owned and managed by its members. They have built-in treasuries that no one has the authority to access

without the approval of the group. Decisions are governed by proposals and voting to ensure everyone in the organization has a voice. There’s no CEO who can authorize spending based on their own whims and no chance of a dodgy CFO manipulating the books. Everything is out in the open and the rules around spending are baked into the DAO via its code.

DeFi stands for decentralized finance. It’s an umbrella term for groups of crypto asset projects that want to destroy a centralized intermediary, like a bank or an exchange, to provide financial services.

A digital identity arises organically from the use of personal information on the web and from the shadow data created by the individual’s actions online. A digital identity may be a pseudonymous profile linked to the device’s IP address, for example, a randomly-generated unique ID. Data points that can help form a digital identity include usernames and passwords, drivers license number, online purchasing history, date of birth, online search activities, medical history, etc. Biometrics, Behavioral, Biographic are the modals that make up a person’s identity.

We love the crypto world because of its sense of humor! Dogecoin is an alt-coin that was created as a joke to make light of the dodgy nature of the cryptocurrencies in 2013. See a Shiba Inu dog? That’s the mascot!

Engagement farming is a tactic marketing professionals use to push content or services in Web3. This strategy gains more outreach for a brand, thus resulting in more business. It’s generally considered a new type of spam.

Ethereum is so fetch. She’s the Gretchen Weiners of the crypto world, Ethereum is one of the top three cryptocurrencies in the world. Despite being just as cute as Bitcoin, and being just as smart as Bitcoin, and open source and based on blockchain technology, it differs from bitcoin in two ways: it allows developers to create dApps and also write smart contracts.

Money, mula, cash, that good good, fiat is the traditional currency backed and regulated by a central bank that we use in the real world.

FOMO is an acronym that stands for “Fear of missing out” and basically the reason we created this glossary for you.

An acronym created for the haters (or Fudsters) out there, it stands for “fear, uncertainty, and doubt.” This dismissive label refers to negative information about cryptocurrencies. It’s usually applied when Bitcoin’s environmental impact or the use of cryptocurrencies for money laundering.

In the Ethereum network, gas is a measurement given to an operation in relation to the computational power required to complete it. That measurement refers to the fee offered to miners who process that transaction.

The number of bitcoin allowed is locked at 21 million, in order to keep the total below, the amount of bitcoin earned by miners for filling one block is halved at the completion of that block.

An acronym that means “Hold on for dear life.” It’s the battle cry for crypto users as they face the tumultuous landscape of cryptocurrency investing.

The economy’s worst nightmare inflation is the general increase in prices and fall in the purchasing value of cryptocurrencies and fiat.

Liquidity refers to the ease of access with which investments can be converted into cash.

A cryptocurrency that is associated with a meme or viral online joke. For example: dogecoin.

The Metaverse embodies the expanse of the digital universe. It’s basically virtual reality.

The process of legitimizing transactions on the blockchain. Large networks of computers and miners work together to calculate cryptographic equations that verify cryptocurrency transactions.

The one that started it all! Satoshi Nakamoto is a pseudonym for the creator/creators of bitcoin.The pseudonymous creator — or creators — of Bitcoin.

A non fungible token typically on the Ethereum blockchain. Unlike other cryptocurrencies, NFTs cannot be interchanged with another token. This unit of information is ideal for content creators/artists because it legitimizes unique pieces they create to sell. If someone owns an NFT, it means they own the “original” copy and not the copyright or intellectual property rights.

No, it’s not some type of origami. Paper Hands is slang for investors who sell investments too early, often because they are are scared of the risk. It’s like they’ve never heard of HODL, ya heard?

As all of us already know, a protocol, in computer science, is a set of rules or procedures that govern the transfer of data between two or more electronic devices. This protocol helps

in establishing how, in order for computers to exchange information, the information must be structured and how each party will send and receive it.

In Private Key, the same key (secret key) is used for encryption and decryption. This key is symmetric because the only key is copied or shared by another party to decrypt the ciphertext. It is faster than public key cryptography.

Show me the money!! Use a public key, a long string of numbers and letters, that is unique to your wallet address to receive cryptocurrencies.

In a decentralized community, you can do just about anything, but some stuff is considered a no-no. One of them is the act of purchasing a bulk amount of crypto to drive up the price (pump) inspiring others to invest and then selling the lot at first sight for financial gain.

We ain’t got time to read the whole blockchain ledger! Sharding is the tactic of dividing up the full blockchain history so each full node doesn’t need the whole copy of it.

A computer program that holds financial assets and can be coded with the ability to execute actions by itself, if certain requirements are met.

A “stablecoin” is a type of cryptocurrency whose value is pegged to another asset class, such as a fiat currency or gold, to stabilize its price.

It’s like when you hang on to funds in your crypto wallet, to like, support the cause and what not. You basically lock onto cryptocurrencies to, like, win rewards.

It’s like a reward! A token is a unit built on an existing blockchain and intended to be an incentive or reward for continuing separate projects on that blockchain. It differs from a coin.

The tragedy of the commons is an economic problem in which every individual has an incentive to consume a resource, but at the expense of every other individual—with no way to exclude anyone from consuming. Initially it was formulated by asking what would happen if every shepherd, acting in their own self-interest, allowed their flock to graze on the common field. If everybody does act in their apparent own best interest, it results in harmful over-consumption (all the grass is eaten, to the detriment of everyone)

The Violet Verse is a decentralized modern finance & lifestyle protocol. The company provides impactful solutions for Web3 businesses and curates educational content experiences for forward-thinking individuals around the globe.

A crypto wallet is basically a software program that lets you store crypto coins. Say you bought a certain amount of Bitcoin, a form of electronic currency. Since it has no physical form, how do you safely keep it? This is where you need an online storage facility. A crypto wallet will do that for you.

The newest version of the world wide web built on the blockchain.

Cryptocurrency whales have an effect on the whole crypto ecosystem. They are individuals or institutions that hold a large proportion of the coins of a particular cryptocurrency.

Sizing Up Shopping in Web3 and the Metaverse