A Single Mama's Journey in NFTs 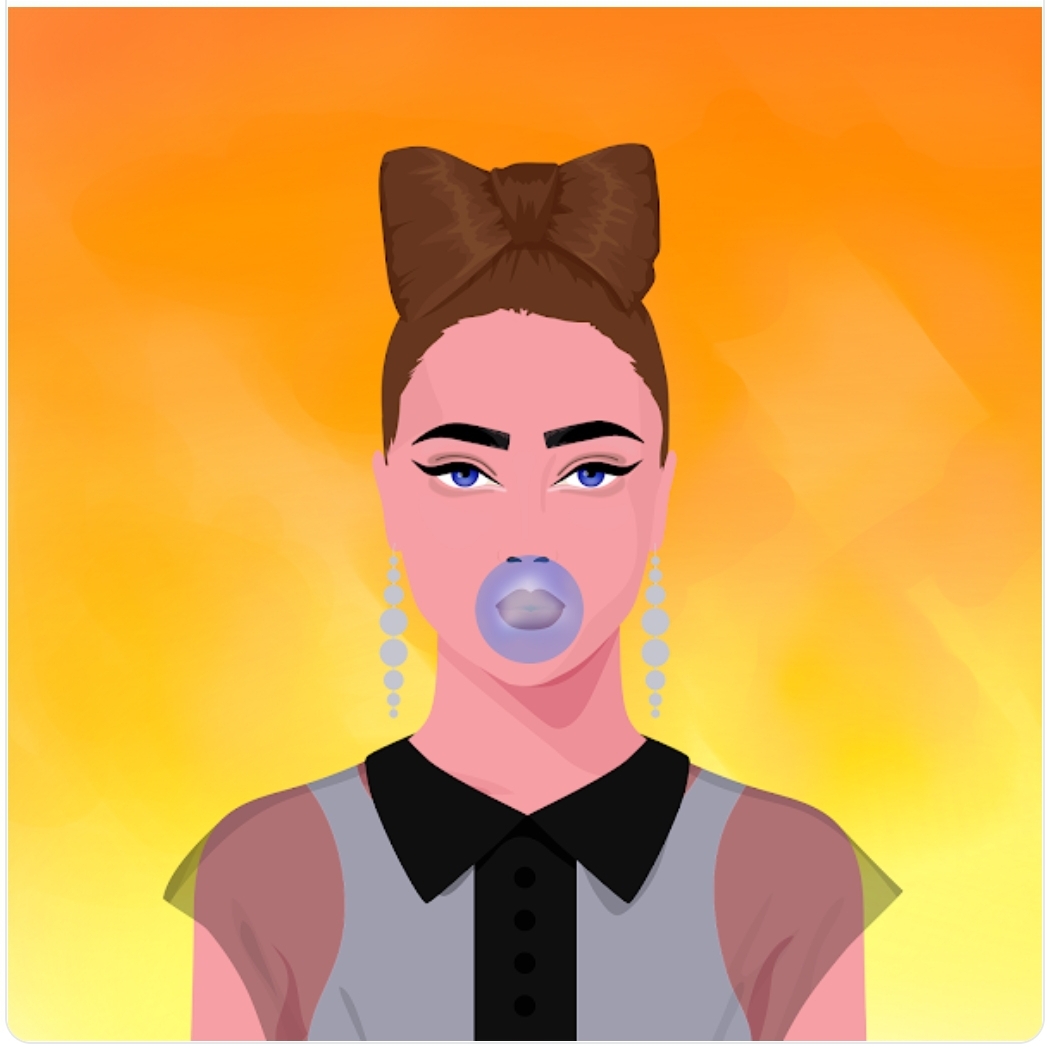 I entered crypto the same way many do, by downloading the Crypto.com App. I then bought my first fraction of a Bitcoin, some Ethereum and obviously some $CRO. As I was buying, the market tanked. Because I was unable to make money with the market in constant decline, I learned to trade. I used (small) leverage in order to short to market as it continued trending downward. I spent countless hours and a gross amount of sleepless nights learning to trade and to do so successfully.

My first born was just a year old when I ventured into this crazy world of crypto trading. I continued crypto trading up until my second born was 4 months old. That's when I decided to enter the non-fungible token (NFT) space. For some reason, I thought it NFTs would allow for more time with my children. *facepalm*

It originally took a long time to wrap my head around the concept of an NFT. And smart contracts in general. To be perfectly honest, when I bought my first NFT (SolSister on Solana) in December of 2021, I am not sure I understood what I was doing then either, or what I had purchased. I simply knew I liked the roadmap and the fact that it was one of the OG WomeninNFTs projects.

I played around with a couple projects on Solana, mainly sticking to Solsisters.

I then discovered the crypto.com/nft marketplace. Though, I had previously received the notifications for the Loaded Lions and PsychoKitties drops. And to be fair, I wasn't overly interested in anything crypto.com had to offer before January of 2022... I know I know, my fellow Crofam readers, you don't have to say it. There's one beautiful thing about learning to trade before entering the NFT space; I learned to never dwell on missed opportunities as there will always be more.

Through December 2021 to January 2022, decided to study all things NFT and smart contracts. I always wanted to help other single mothers, and women in general, share knowledge and teach them to bring in some kind of income. Whether it's from the crypto space, or it be in Web3, or somehow bridging web2 with crypto. The mission was not to not enable them, but to share the knowledge I had come to acquire. Then let them figure out how to use it for themselves, and help fund the beginnings of their journeys.

And I could do this all AND tap into my creative side all at the same time? Sign me up! I began to create some pieces that would later be called "Free Mamas", came up with a plan for the "how-to" portion of the mini project, and minted them on crypto.com/nft.

In mid-January 2022, I joined my first "crofam" twitter space. Prior I was in WomeninNFTs spaces for Solana and Ethereum. It was a whole different world. The vibe was entirely different than what I had come to know. I quickly noticed that there were in fact very few women in the space. It felt like a boys club. Though I doubt that was the intention. Rather the product of the fact that it was likely a 95 percent male community.

I was slightly discouraged. I soon began to wonder if choosing the crypto.org chain was the right choice for my small, women focused project. Then one night, for some unknown reason, I gave another Crofam space a try. This time it was Lazy Horse Race Club. It was the day before the mint of their 2nd collection -- the Ponies. The space was friendly and inviting. They were generous and helped many others who had encountered issues in the crypto and NFT space. It felt like a space and community I could connect with.

The next day, I minted my first Pony.

I began checking into the LHRC space daily. And from there connected with Victorie, who would later become one of my dearest friends in the community. She and I had this idea one morning to create a women's chat group and space. Which, would come to be named Ladies of the LHRC. We even created the female jockey! An avatar individuals could add to the ponies/horses PFPs, to distinguish the women in the crowd from the men (for those that wanted to be distinguished of course). Every Thursday, at 9 p.m. EST, equipped with our female jockeys, I would host the first women focused space for the cronos network, with Victorie and Duchess as my amazing co-hosts, and many LHRC holders joining us. This space existed from the beginning of February to April.

On Feb 17th, discovering the Trooprz collection I recently bought into actually has a bow trait. I did not yet have one with the trait. I edited one of my VIP trooprz and then added a giant bow (so as to be easily distinguishable from the proper trait for the collection). It was all in good fun and meant to give mainly myself a bit of a laugh. Little did I know, the bow would later become my signature and part of my personal branding.

Come March, I was working so hard (as were many others in the community) to help connect the women from the various corners of the Cronos network. Somehow I managed to land myself a moderator role within the Troopz discord server. A role I was rather proud to get and one I still hold to this day. Being a mod for Troopz has undeniably opened more doors for me. The position created some deep and meaningful relationships with people who are now in my inner circle.

As April rolled around and I had stepped down from hosting the weekly Ladies of the LHRC space. To better focus on my personal my next moves, I contemplated applying to become a Community Manager for Troopz. I had was gaining more and more experience running events for the community as a mod. It even gave me serious consideration to taking on more. At that same time, I had begun working casually with the Northern Hippo Syndicate. And within days agreed to become their Community Manager and remain a mod for Troopz. As at that moment, the role was the better fit for what I was trying to accomplish overall, as well as with my schedule as a single mama to toddlers.

Additionally, prominent figures me asked to become a regular co-host of Crofam. The largest weekly Twitter space for the Cronos and Crypto.org chains. I co-hosted for 3 or 4 weeks before the host and my fellow co-host took a break for a couple of months. Later I reprised my role for a couple events. I ultimately stepped down entirely so I could better focus my efforts.

By mid-May, I had moved up from being the Community Manager and took on the Project Manager role, just a few short weeks before the project launched. Working day and night, alongside my all-male team members, to get the project ready for mint was one of the most exciting and stressful times I have experienced. Admittedly, balancing the needs of a project launch and raising both my toddlers solo, was no easy feat. Many tears fell as I worked hard to make the sacrifice of time be only temporary, all while trying to enjoy the experience.

The next 5 months of minting during a bear market were truly amazing!

And though we have not finished minting out, we have in fact made big strides! The team really learned to work together, through ups and downs. The experience gained from running most of the behind-the-scenes tasks for the project, has been life changing and certainly changed my perspective on NFTs and crypto in general, perhaps for the best.

But none of that is to say that I have not had my breakdowns of being frustrated with learning to balance work and kids, or that at times I had felt like I had abandoned my mission of helping onboard women and getting them setup. Though none of that could have been further from the truth. My team graces me with understanding and patience with my need to make mama-duties priority and have been nothing but supportive with my efforts, that never stopped, even when they felt like they did, to help support women in the NFT space in every way I could.

All along I had been still buying into women-lead projects on various chains. I had become a mod for SolSisters on Solana, and picked up some NFTs from projects on Cronos with women on the teams, as well as bought into Clinic and Crypto Tech Women on Ethereum, as well as several independent artists and a few mini projects! Solsisters, Clinic and CTW were where I gave the majority of my "free time" however. I quickly fell in love with the educational platform that CTW was creating and wanted to become a part of it somehow as it lines up so beautifully with my original mission.

While I was looking into how I could get involved more, members of the Hippo and greater Troopz Whitelist community had expressed interest in having learning resources available to build their confidence in becoming mods, or looking to launch their own discords. And with the experienced I had gained over many months of setting up, managing and moderating discord servers, I reached out to Crypto Tech Women and applied to be able to make that very topic a masterclass available on their education platform. And I was beyond excited to receive the "yes" from them one fateful day!

The very professional follow-up video chat took place with their team. The way team conducted business in a different way. It was like a breath of fresh air. The Crypto Tech Women pushed me out of my element and forced me to step up my own game. I was beyond appreciative. That's not to say the ladies were not inviting and friendly, of course they most certainly were, but they were also confident and organized. I left the call having much more respect for the project as a whole. The masterclass will be released soon!

Then soon after that, after watching Violet Verse on Twitter for a while and knowing the general idea of the project, I finally gave it a serious look. It didn't take long to fall in love with it and see the potential of where it could go and how it could fit into my greater mission.

And so even though the Northern Hippo Syndicate is still my main concern, I have also been shifting my gears back to focusing on my WomeninNFTs stuff and trying to bring even more value to my Free Mama holders and fulfilling my original promises. And I could not be happier for what the future has in store!

For more stories check out the VioletVerse.io.

*This is not financial advice. Do your own research.

Get Closer To Polygon & Nft's